We now live in an age where this is becoming the expectation for public exposure, and people seem to be quite willing to accept it: 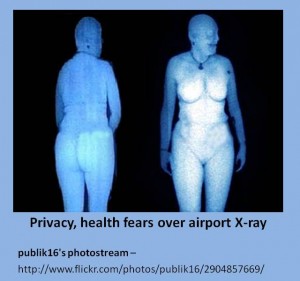 Despite the fact that Airport body scans reveal all, apparently 99% of passengers have chosen these over the traditional body-search-via-wand-and sometimes-pat-down technique most commonly used. Is this a real choice in terms of maintaining personal dignity and privacy? I think not.

As technology advances it seems that privacy becomes more and more difficult to maintain. Some say that our attitudes towards privacy are changing as online social networking becomes more popular. The problem is that, as with airport screening, we allow our choices to be determined by the technology, and unwanted public exposure is the result.

This video from the Office of the Privacy Commissioner of Canada frames social networking from the site owner’s point of view.

Social networking comes with a price  says, “According to the most recent data from comScore Inc., nearly 17 million Canadians have a Facebook profile, 4.5 million are on MySpace, 14.5 million visit YouTube every month, 3.6 million upload photos to the sharing site Flickr.com.”  Many of these people risk identity theft, permanent damage to their reputations, and may even court personal harm by leaving profiles open to all.  Reporters collected detailed and specific information (phone number, address, maps to workplaces and homes) and photographs, some sexually explicit, about 12 Canadians, including several under 18, by looking at their public profiles.

When Social Media Bites cites several “online acts of idiocy,” such as the burglar who checked his Facebook profile in mid-crime and the woman who applied for a job, used the company name in a tweet to friends about how she’d hate the work, then was surprised that a company employee read her tweet.

Some sites make it almost impossible for users to maintain privacy. Privacy complaint filed against Edmonton-based social-networking site details issues with Nexopia, where “users can upload a variety of information from age and interests, to e-mail addresses and photos, all of which then becomes searchable. Privacy settings can later be set to hide personal information, however, four details — username, sex, location and age — can never be changed or deleted.”

In addition, unscrupulous scammers capitalize on our privacy fears.  Who’s watching you really? shares that just two phishing sites collected Facebook log-in information from 350,000+ people so eager to find out ‘who was “spying” on their profile (there’s been a lot of media about insurance companies accessing social media sites as a way to deny claims), that they fell for the bait – hook, line and sinker.’ 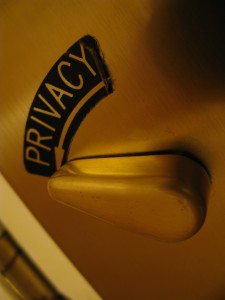 Please do adjust your set

In Making Sense of Privacy and Publicity, danah boyd points out that with many social networking sites , “the conversation is public by default, private through effort.” For many users it isn’t always easy to figure out how and when it’s appropriate to set the mode to private.

Watch Social Media Risks below for a much more detailed look at the issues.

What can we as educators do?

While our government is moving to protect online privacy for us and for our children, we need to be pro-active with our students. There are many resources available to help us teach our students (and their parents) about privacy and social networking.

danah boyd provides excellent advice on how to begin. She says,

“Rather than approaching teens and telling them how things should be, why they shouldn’t be putting material online, please consider the value of opening up a dialogue. You have a lot to learn from what teens are trying to do; you once had to make sense of public life too. The difference is that they are doing it in the new environment. Take what you know and then actively listen to teens. Through their struggles, you can see what is new and different.

The key to guiding teens – and for that matter, yourselves – is to start by asking questions. What are you trying to achieve? Who do you think you’re talking to? How would you feel if someone else was looking? What if what you said could be misinterpreted? Start these conversations when your children are young and help them learn how to evolve. There’s no formula for them either.”

What works for me…: Owning Your Digital Identity – Start by investigating/cleaning up your own online presence. Establish your online identity, reputation, and persona, and protect it with these invaluable guide. Then teach these techniques to your students.

Educate yourself, your colleagues, and your students with these Google videos:

Office of the Privacy Commissioner of Canada – My Privacy, My Choice, My Life – site for young people about protecting one’s privacy, including videos created by teens such as this one.

In Your I !, a Canadian site, provides a unit on privacy education for teens, with videos, scenarios, discussion guides and much more.

Check out bNetS@vvy with articles such as Not Your Parents’ Internet: Understanding “Web 2.0″ Safety by lawyer and educator Nancy Willard.

And let’s not become so desensitized to our privacy that this also becomes the norm: 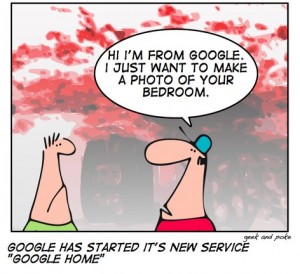 Haiti, The GG, and My Cousin Phyllis – Leading in the 21st century

This week I’ve been thinking a lot about how the catastrophe in Haiti has highlighted the need for 21st century learning – and teaching – skills. As I watch the news about Haiti, and research and read about 21st century skills, I see clearly that what is essential in our society is global awareness. 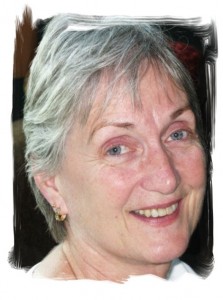 This is my cousin Phyllis (actually she’s my husband’s cousin, but I claim her too). Phyllis, a retired community health nurse, university professor, and motel owner/manager, is my hero. She brought both her parents into her home and nursed them with grace and dignity through their final illnesses. She developed cancer in 2004, underwent treatment, and in 2005 spent a month in Indonesia nursing tsunami victims.

Today Phyllis left for Haiti. As part of a medical group working with Food for the Hungry Canada, she travels with two doctors, two other nurses, and a load of medical supplies. Unless plans change once they arrive, they are headed for Child Hope, an orphanage in Port-au-Prince that has been deluged with injured quake survivors. One of the mission workers has been posting updates about conditions. Like so many other people, they are relying on individuals who hear about their needs and help as they can. 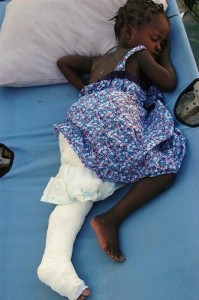 Phyllis, a true 21st century learner and teacher who lives global awareness, is taking a camera to Haiti. As she did in Indonesia, she will photograph her journey and create a presentation when she returns. She is determined that people will see the needs in Haiti as long term.

Another 21st century leader is Michaelle Jean, our governor-general. During the telethon Canada for Haiti, she said,

“We are right now in an era where what we call the civil society is something big and international. There is this sense of togetherness that is happening in the world today, and what Haiti is experiencing has touched the hearts of everyone on this planet. So we must come out of this stronger than ever. We must grow from this and learn from this and also know that it’s Haiti today, but it’s also around us in our communities. We can make a difference to bring about change, and this dream of a better world — it has to be a shared responsibility; it has to be everyone’s business.”

What do the experts say about global awareness as a 21st century skill?

Here are some excerpts from the research: the emphasis (bold) is mine.

In her ASCD article “The 21st Century Skills Movement,” Paige Johnson summarizes the skills and knowledge included in the Framework for 21st Century Learning:

4. Life and career skills (such as initiative and self-direction).

In its Framework for 21st  Century Learning, The Partnership for 21st Century Skills actually lists Global Awareness first under its Core Subjects and 21st Century Themes.

In his article, “Missing: Students’ Global Outlook,” Daniel S. Alemu says, “Schools of the 21st century must be capable of equipping students with appropriate tools—knowledge, skills, and disposition—needed not only to excel in academic subjects and fit in the rapidly changing technological world, but also to become functional global citizens.”

Critical consumption – Everyone needs a “crap detector;” the ability to differentiate good from bad information. [Could we explore with students how many fake Help Haiti sites have sprung up on the web?]

Attention – learning when focused attention or multi-tasking is appropriate; being aware of paying attention

Participation – Young people create as well as consume online. These media enable (don’t guarantee) that people can inform, persuade, and influence the beliefs of others. They can help people organize collective action on all scales. [Could we encourage our students to create and participate in the global response to Haiti?]

Collaboration – Using the technologies and techniques of participation and attention to organize collaborative efforts. Rheingold points out that emergent collective responses (he cites examples of children in California and in Chile using social networks to organize protests) have now become global responses, as with the 2005 tsunami [and now, of course, Haiti].

Network awareness – (I quote Helene Blowers for this) “the combination of reputation, social capital, “presentation of self” and other sensitivity to individual positioning within the network collective.” [Could we help our students to see that building their reputation and social capital can be done while using their skills to help others around the world?]

The world responded dramatically and quickly to help Haiti, most immediately through online technology. Our own Ruth Elliott (@RIElliott) devoted hundreds of hours to coordinating tweets and creating Twitter lists on Haiti to enable information to get to the people who needed it. Dozens of volunteers organized and attended crisis camps like this one at USC where volunteers worked “to design improved maps of battered Port-au-Prince neighborhoods, concoct better family-locater services for quake victims and speed more accurate and timely relief information from more closely coordinated data feeds.”

Geoff Livingston details 5 Social Media Lessons From the Haiti Earthquake Relief Effort. There were mixed results. ‘“Mobile raised tons of money in the world that still had a power grid and IT infrastructure,” said Tom Watson, author of CauseWired. “And it failed rather completely in a world devoid of those industrial luxuries. No ‘app’ was capable of getting anything done in Haiti itself. And we should be up front about that.”’

Social media contributed heavily to the traditional media with local bloggers and photographers providing material to the networks. While the earthquake and its effects were explored, the background story of poverty and violent history was not. And there is no guarantee that the long-term effects of the earthquake will hold our attention for long.

I’ll be looking for examples of students using their 21st century skills to respond to and help their fellow global citizens in Haiti, and I hope to share some with you.

And by the way, if you could take a moment to include Phyllis and her group in your prayers, I know they’d appreciate it.