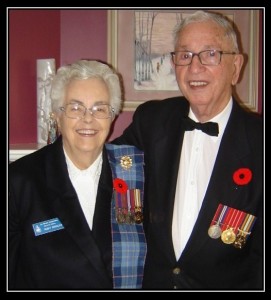 Last Saturday I experienced my own personal digital divide. At 8:49 am I turned on the computer to work on a blog post and saw this CBC headline on  iGoogle: Chile hit by 8.8 earthquake.

Remembering Haiti, where CNN got its updates from social media, I looked at TweetDeck. Many tweets had #chile as hashtags; I set up a feed for that, and then saw several mentioning a tsunami warning for Hawaii (#hitsunami).

My parents, who are in their eighties, are holidaying in Honolulu. My immediate thought: Indonesia, 2004. While my folks are healthy, I’d just as soon they didn’t have to survive a catastrophe while I was cut off from them –not that my being there would have been much help!  I knew I couldn’t reach them immediately (the phone lines were busy and they were using an Internet cafe to email).

While I waited, I worked on my digital divide post, and tried to apply some of what I had read to what I was doing online.

I began using Twitter in January (up to that point I thought it silly). Now here I was setting up searches for appropriate hashtags, modifying Tweetdeck, sifting genuine tweets from spam, and using Twitter as my source of real-time information. How did I make this leap? All of the requirements I’d read about in this article (thanks, Natasha) were in place: 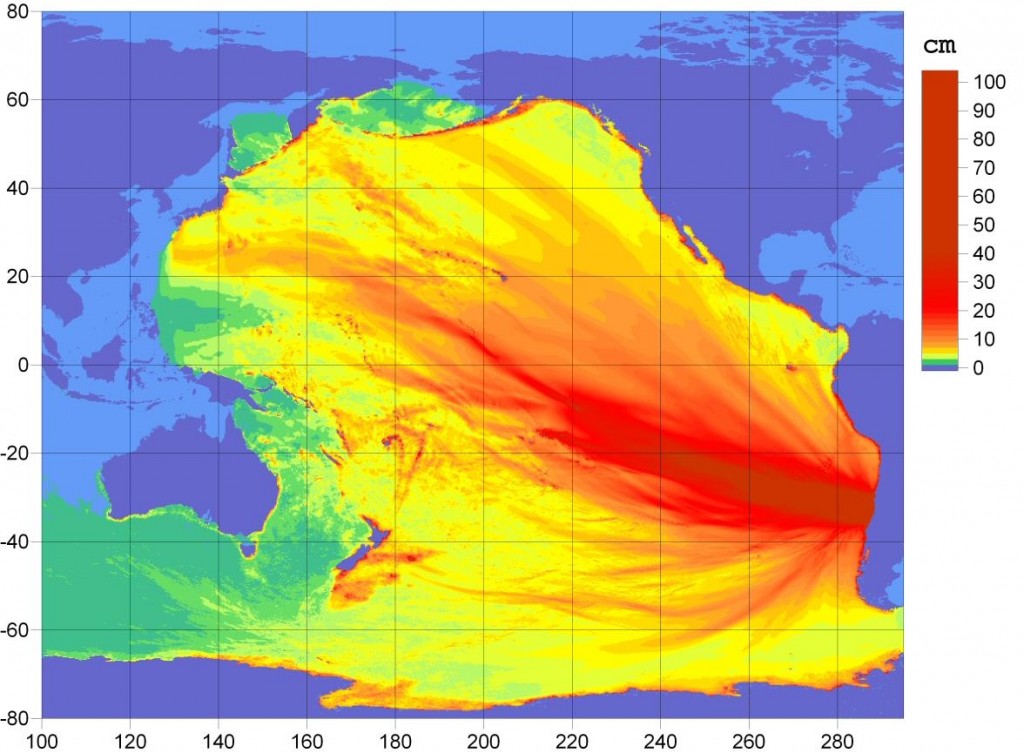 As we all know, there was no tsunami. At 5:11 pm Mom emailed to say they were fine — had stayed in their 12th floor room watching the bulletins on TV. While there’s still physical distance between us, the digital gap was bridged.

Time for Educators to “Mind the Gap” 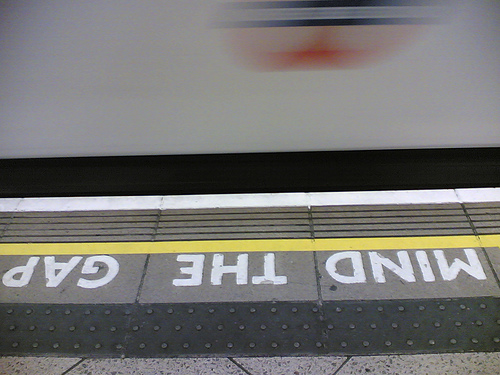 Too often those on the wrong side of the divide watch as others take off into the future. As educators we need to clearly understand what the digital divide is, and its implications for our classrooms and our world.

A number of recent studies have looked at the extent of this divide. Fairlie found that US children with home computers — more whites than Latinos or blacks — are more likely to go to college, and the divide is wider with children than adults.

Digital Divide in Canadian Schools found students from “families with low levels of parental education and those from rural areas are less likely to have a computer in their home. Those from lower SES homes tend to spend less time on the computer and . . . report lower levels of computer competency.”

The report mentions the troubling trend in Alberta to get rid of tls, counsellors, and speech pathologists to free up dollars for technology. As more funding goes to computers, “unequal outcomes may stem from differences between affluent and disadvantaged students in what they do with the technology, once they have access.”

Peña-López points out something that most tls know: access to computers alone doesn’t tranform students into 21st century learners. Competencies are the real concern: “the digital divide in education . . . is not a matter of physical access but a matter of digital skills and how competent students (and teachers) are at computer and Internet usage.”

While Digital Divide in Canada says that while in some ways the divide in Canada is closing, it is still wide between low/high income groups. Obviously factors other than race, funding, and economics come into play. Inequities in filtering (Nelson), attitudes and assumptions about what constitutes effective use of technology (if everyone I know does this, then it must be universal) (boyd), and disabilities also are part of the digital divide.

Vicente and López (2010) present troubling findings about those with disabilities:

The global digital divide is explored in UNESCO’s Annual World Report 2009. “The digital divide amplifies the already existing social inequalities cumulatively” for economic and social reasons (cost, education), cultural (people have no use for it, no role models), and content reasons (not available in their language, lacking local content). The report highlights the role that culture and regional differences play in how governments choose to develop and implement technology, pointing out that what is appropriate in one area won’t necessarily work elewhere, another lesson that educators must heed.

Bridging the Digital Divide in Our Schools

My parents will be home in a few days (yes!), and I want to teach my dad to use Twitter. 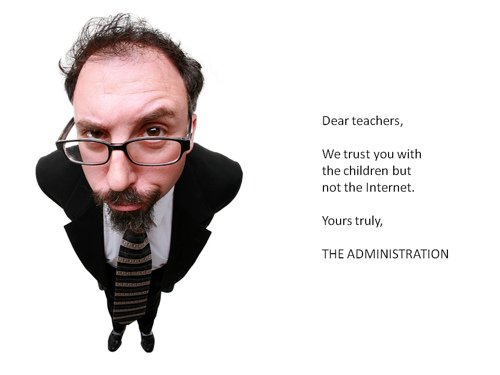 Does this picture remind you of how your administration treats its teachers?

Do you see internet filtering as indiscriminate censorship and a challenge to intellectual freedom?

When it comes to internet filtering in the district where I taught for 38 years, and where my grandson will attend school, “I’m Mad and I’m Not Gonna Take It Anymore,” to quote Mary Ann Bell. Internet filtering in my local school district does not work as it should. Bell  (2008) provides a clear call to action for those fed up with the problems filtering causes teachers and students. She says, “It is time to move past fear mongering and paranoia as guides to internet access in schools.”

Of course this isn’t just a local problem. Cathy Nelson says, “I think the biggest problem at hand is complacency among educators in general. This IS an issue of intellectual freedom. Rights are being infringed here.”

Buffy Hamilton agrees, “I get so frustrated when people complain about the filter issues but then take no constructive action to educate the decision makers about the resources we want unblocked.”

Can we eliminate filters?

Finnish schools don’t have any; instead they teach responsible use of the internet. “Over there, thanks to solid teaching, the filters are in the students’ heads. Ultimately, that’s where we need to be too.” (Weinstock, 2008; Villano, 2008)

We are nowhere near that point in Alberta, where teacher librarians are almost extinct, teachers have to push students through curricula to pass provincial exams, and we have no mandated curriculum in internet literacy. We can’t get rid of filtering altogether.

Here I agree with Nancy Willard. “There are certainly some benefits from the use of filtering software — if, and only if, filtering companies are not blocking based on viewpoint discrimination, and if educators have the ability and authority to promptly override the filter to access and review any blocked site and to provide access to students when appropriate.”

What Makes Me Hopping Mad?

How about the deceit that internet filtering promotes or tacitly condones in students and some staff? To illustrate:

This situation reminds me of what Admiral Mike Mullen said to the senate about the “Don’t Ask, Don’t Tell American military policy. “No matter how I look at the issue, I cannot escape being troubled by the fact that we have in place a policy which forces young men and women to lie about who they are in order to defend their fellow citizens.”

Shouldn’t our policy makers be troubled by a policy that encourages or tacitly condones our teachers and students to break the rules? Don’t misunderstand me — I am not excusing their behaviour. But I agree with Doug Belshaw: “I want clear policies whereby both staff and students know where they stand when it comes to internet access and filtering. As far as I’m concerned, resources should be available for teaching and learning unless a clear case can be made otherwise.”

We need to find a way to protect students without interfering with our teachers’ right to teach and our students’ right to learn. And I don’t think internet filtering as it now exists is the solution. To echo Will Richardson, there is too much “don’t” and not enough “do” going on, and definitely not enough teaching about responsible internet use.

I’ve identified issues from my own experience, from my reading, and from my conversation with some of my colleagues. Some of the fixes are self-evident.

So how do we effect change?

I urge you to view Buffy Hamilton’s slideshow below, and to visit Fighting the Filter. She provides some common sense ways for tls (and teachers) to assert our professionalism in filtering issues. After all, Hamilton says, “If our goal is for students to be information fluent learners, we must have access to the tools so that students can ultimately act as their own filter.” As a retired teacher librarian, I’m going to start asking questions, writing letters, and advocating for change.

By the time my grandson starts school I want all the “don’ts” of internet usage gone. I want his teachers (hopefully Pam, Carla, and Greg) to tell him, “Do use our network to collaborate with others to change the world in meaningful, positive ways.” (Richardson) Isn’t that what education is all about? 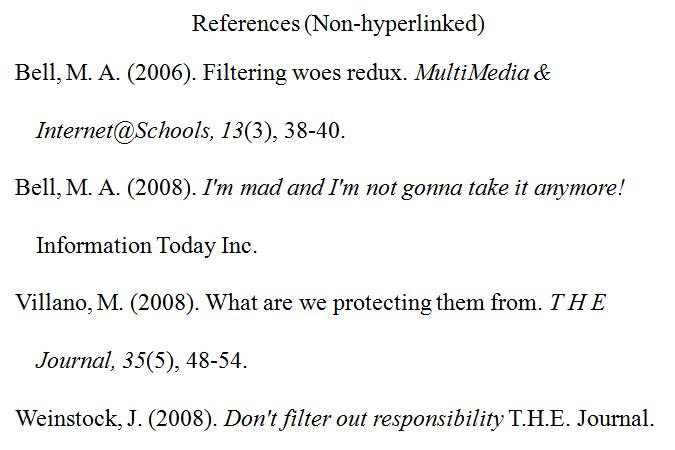